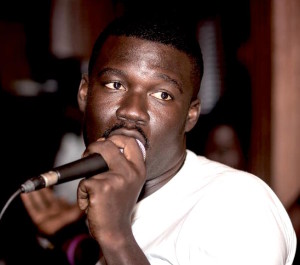 Mutombo Da Poet is a spoken word artist based in Ghana. He started performing in the country in 2006, a time when there was no poetry/spoken word scene in Ghana. He was a resident poet of the open mic show, Bless The Mic and was the first poet to perform as a guest on the TV3 reality show Mentor.

Mutombo is the winner of the first Ehalakasa Poetry slam held at Alliance Francaise in 2009. He has performed at over 300 shows in Ghana and in February 2015, performed in the United States of America. He has released many spoken word tracks, was the first to release a spoken word video in Ghana, and released the PHOTOSENTENCES spoken word album in 2012.

He is an avid photographer with a focus on social and environmental issue. He won the best Tumblr in Ghana in 2014 and was on Instagram’s Suggested list in November 2014.